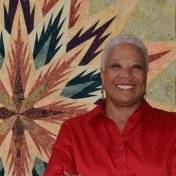 Quilting is in Jeanette’s DNA. Both her grandmother and mother were hand quilters. Jeanette still has a nine-patch quilt made by her grandmother that was given to her as the oldest grandchild. She cut pieces for her mother using scissors, which we all know was not fun. Fast forward to 2003 when she took a class and discovered the rotary cutter. In 2006, she discovered paper piecing. Jeanette loves the sharp points and precision of paper piecing and is CDO (OCD with the letters in the proper order, as they should be) about pieces lining up, so paper piecing had immediate appeal. In 2008, she discovered Judy’s Amazon Star and has been a Judy groupie ever since.

After retiring from a career in Human Resources in 2013, Jeanette began teaching Judy’s patterns at a local quilt shop. Her passion is showing beginning students how easy Judy’s patterns are to read, how organized the patterns are, and how simple to finish if the steps are followed. Her biggest reward is the satisfaction of seeing amazing works of art from beginning students who said, “I could never do that.”

Jeanette’s second passion is travel. She has combined her love of quilting with her love of travel, and attends quilt festivals, shows and retreats around the country and around the world. Jeanette holds officer positions in several guilds. Her goal in life is to reduce the abundance of UFO’s multiplying in her studio.