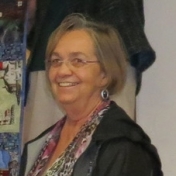 Barbara grew up on the western slope of Colorado and moved to New Mexico in 1953.  She began sewing at nine fashioning 4-H projects receiving ribbons for her clothing at the Garfield County fair.  She made many of her clothes and accessories during her school years. Barbara made her first quilt under the guidance of her mother-in-law which was an embroidered state flower and bird pattern, set together with turquoise sashing and then hand quilted.

She spent the next few years raising a family, farming and ranching and sewing as a seamstress.  In 1992, Barbara took a machine quilting class and was hooked on the process.  She joined the local quilt guild and began taking quilt classes.  It was a great outlet from her hectic professional life as a Senior Systems Analyst. After retirement, she completed her Bachelor’s degree in Sociology and Criminology.  Then she began to teach quilt classes around New Mexico and Colorado finding a passion that still continues.

Barbara’s first sight of Bali Wedding Star at a Colorado quilt show sparked her interest in Judy Niemeyer’s paper piecing method because of the precision and organization.  After Judy lectured and taught at her guild, Barbara began working on Amazon Star, which she entered in the Roswell quilt show and received a first place and best of show ribbon. She is delighted to be a Judy Niemeyer Certified instructor so students have the opportunity to learn the organized techniques and processes used to create these beautiful quilts.

Barbara has been teaching for 20 years for guilds and groups around New Mexico and Colorado, at three of the local quilt shops in the Albuquerque area, at her church and where she also oversees an annual quilt-in for over 100 quilters, and at a semi-annual retreat held in the mountains north of Albuquerque.  Barbara’s husband Jim joins her as she travels to classes. Her other interests include making bobbin lace, creating stained glass pieces, playing the hammered dulcimer and she has just taken up Japanese weaving on a Takadai.