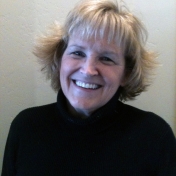 Kathi’s love of quilting has grown over the years. Her first quilt was two fabrics tied together and the backing brought around to the front. This was for her first son, Jason, who is now 43. He was the first of her seven children and now 14 grandchildren. She saw her first long-arm machine about 14 years ago. That was one of a series of “ah ha” moments in her new quilting career! She was never fond of hand quilting or appliqueing, so when she learned that both of those could be done by machine, things really changed. She got her first longarm machine on a Gracie frame and after 6 months decided she needed something bigger. She started Quilting by Kathi and got a used Gammill classic, but after about two years, she realized that she “needed” a Statler Stitcher, with all of the bells and whistles. Her sweet husband was a little concerned and said “that costs more than my first house!”.

Then about eight years ago, while at her guild retreat, she saw two girls working on “Judy” quilts. Another “ah ha” moment! Kathi had tried paper piecing in the past and loved the precision of it, but not the scrappy cutting process. She loved the organization and everything about Judy’s technique. She is very excited to be a Judy Niemeyer Certified Instructor. She finds great joy in sharing Judy’s process and techniques. finds that it is so awesome to see and share “ah ha” moments with other quilters, when they see how easy and perfect their blocks and quilts turn out. They are able to do things way beyond what they ever thought they were capable of doing.

Kathi starting competing with her quilts since then, which are named after her grandchildren, about 10 years ago. She has won numerous awards, including 2 Best Longarm Workmanship awards at AQS Shows, 2 quilts placed at the IQA Houston Show, and in Feb. 2014 won Best Of Show at the Phoenix AQS Show. She was also presented with the National Teacher Award by Elly Sienkiewicz in 2013.