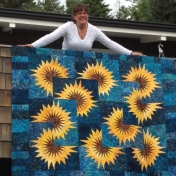 Janet lives in Whitehorse, Yukon, with her husband and her crazy dog Molly. She began sewing as a teenager, working on clothing and quilts. As an adult she also sewed clothing for her beautiful daughter Chrissy and her average son Robbie. Janet began teaching her daughter to sew when she was 5 years old and they share a love for quilting and wine.

Janet discovered Judy Niemeyer quilts in 2013 when she was browsing a shop selling Mariner’s compass kits. She picked one up, but had no idea where to start! She ended up beginning with the Sunflower Illusions quilt. Once she got started with paper piecing she couldn’t stop! She has just recently completed that first Mariner’s Compass kit as one of her certification quilts in 2016.

Janet specializes in teaching new sewers, and has recruited many new paper piecing fanatics. She teaches out of her cozy ‘She Shed’ in Whitehorse. Janet is looking forward to the task of teaching her first Granddaughter the joy of sewing, but for now will get her started on pulling those papers off!

Sorry, there are no classes scheduled for Janet Spinks at this time.