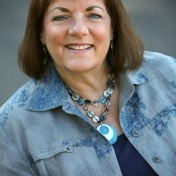 Gretchen started sewing clothes for herself, her mother and two sisters when her grandmother gave her a Featherweight when she was ten years old. She sewed all her clothes, her mother’s skirts and blouses for work and all the prom dresses through high school and college. None of her family sewed or did anything ‘crafty’. She taught herself to crochet and knit, and gave up knitting when she got tired of trying to fix mistakes from a few rows past! It was much easier to fix a crochet mistake.

After college in the early 70s she worked as a business software developer/manager for Hewlett-Packard and eventually started her own business developing software for small businesses using desktop-like computers (pre-IBM PCs). When her daughter was born in 1988 she decided to become a stay-at-home mom and eventually home-schooled. During that time Gretchen worked with Patti Palmer of Palmer-Pletsch and became a Certified Sewing Instructor, teaching 4-day workshops in the Palmer-Pletsch School of Sewing in Portland, as well as teaching many different classes ranging from fit, pants, tailored jackets, lingerie, swim-wear, fleece, and more.

When her daughter was four she started classes for children in her home and taught them hand-sewing up through machine sewing over the years.

Gretchen discovered quilting in 2008 when she was recuperating from a surgery. While driving around her new neighborhood, she came to a quilt shop and went inside to look around. She purchased McKenna Ryan’s “Faith, Hope, and Love” as her first project. In 2009 she submitted six quilts to the county fair and received a $150 check for the awards, including a Judges Choice award on one of her first place quilts. During her early years of quilting she attended every quilt class she could and also started working at that quilt shop a couple Saturdays a month while working a full-time job.

She purchased her first Judy pattern online in 2008, Island Sunrise. When the pattern arrived, she looked at the instructions and thought “maybe I will understand this when I learn how to quilt”! She also found the Quiltworx site and the information on becoming a certified instructor and thought that would be a perfect job for her retirement.

Fast forward seven years and ready to retire from her corporate job, she began working toward instructor certification in September, 2014, and will be certified in September, 2015. Gretchen loves Judy’s paper-piecing method because of the precision and excellent instructions and has a great time teaching others to learn these techniques. Although she has purchased a number of ‘fancier’ machines over the years, Gretchen still uses her grandmother’s Featherweight to paper-piece when she needs to take a machine on the road.